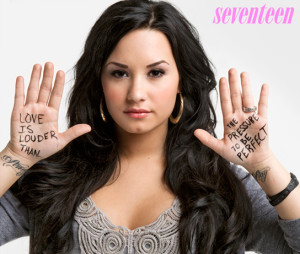 Megastar Demi Lovato is barely legal to drink at 21, yet she has already reached a stunning level of success in the entertainment industry. From her inception into acting as a young child on the infamous children’s television show, Barney & Friends, she has progressed to achieve many accomplishments and accolades. She starred in the television film “Camp Rock,” the TV series “Sonny with a Chance” and has released multiple albums, while stuffing multiple platinum-certified hit singles under her belt in the process. She is talented and supremely blessed. However, many of us do not appreciate the personal lives of such megastars.

In the fall of 2010 Demi pulled herself out of the spotlight and her touring responsibilities in order to address her “physical and emotional issues” by checking into a treatment facility geared for such rehabilitation. During her stay at the treatment facility she was diagnosed with bipolar II disorder. And as is common amongst sufferers of such conditions, many other problems sat right alongside Demi, such as bulimia, self-mutilation (in the form of cutting) and substance abuse.

After stepping out of treatment and back into the spotlight, Miss Lovato bravely opened up to the public about her breakdown and the personal struggles that led to it. She discussed her diagnosis of bipolar disorder and how her experience with her treatment has allowed her a window to see how she can overcome its obstacles and use them to grow stronger as a person. The experience has given her a lot of personal insights and foundations to build from. In 2012 MTV aired a documentary called “Stay Strong” about her time in treatment and diagnosis of bipolar II. It is believed that Catherine Zeta-Jones possibly came out about her personal struggle as a bipolar II sufferer, inspired by Demi Lovato’s own brave stand. That rumor is merely speculation, but it may very well be true and demonstrates the power of one voice to give strength to many. It becomes a chain reaction that inspires and gives hope to an isolated minority.

Indeed, the experience seems to have only strengthened Lovato as we have seen her prominence in entertainment only expand. She has been a returning judge on the American “X-Factor” show and continues to release albums that garner increasing acclaim and popularity.

Here’s what Lovato had to say about her eating disorder (bulimia) and substance abuse:

“I was about 12 or 13 when I developed my eating disorder, and at that time nobody in the public eye talked about their body issues. I feel that if someone had admitted they had a problem, then I wouldn’t have gone down that route myself. That’s my goal in talking about my problems: I want to be the person for other girls that I needed to admire when I was looking for help and strength, and it’s OK to love your body the way it is, and it’s OK to reach out for help if you have drug and alcohol problems, or if you’re self-harming or being bullied.”

Bipolar is a psychiatric condition categorized in the mental health system that is characterized as a mood disorder. There are actually two forms of bipolar – Bipolar I and Bipolar II. Bipolar II has been nicknamed “Soft Bipolar” and although very difficult itself, it is usually not as severe and debilitating as Bipolar I. Demi Lovato was diagnosed with Bipolar II just as Catherine Zeta Jones has been.

What other celebrities have been known sufferers of Bipolar II ?

What is Bipolar II?

The DSM IV is the bible and diagnostic dictionary for psychiatric conditions. It stands for the Diagnostic and Statistical Manual of Mental Disorders and offers a list of criteria to diagnose mental health or psychiatric disorders. It presents the following criteria for Bipolar II:

What is a Hypomanic Episode?

A mood characterized by persistent and pervasive elevated (euphoric) or irritable mood. In other words you feel a little like you’re on top of the world and have surges of energy and creative thoughts or ideas.

What is a Major Depressive Episode? 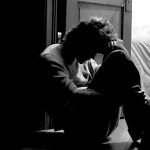 A major depressive episode is a depressed mood and loss of interest and enjoyment of most every day activities for two weeks or greater. Other symptoms usually accompany this general characteristic and include sadness, emptiness, anxiety, hoplessness, feelings of being worthless, guilt, irritability, appetite loss or overeating tendencies, difficulty concentrating, memory impairment, thoughts of suicide, insomnia or excessive sleeping, general malaise (aches or pains), fatigue or sluggishness and excessive worrying.

Sufferers of this mood regulation disorder usually experience chronic depression or euthymia (low level depression that does that does not affect ability to function in social or occupational settings) for long periods of time with brief episodes of hypomania or elevated mood and surges of stimulation and creativity. Often times sufferers will be mood “labile” which means their mood can fluctuate rapidly depending on circumstances and stimulus.

What About Bipolar I? 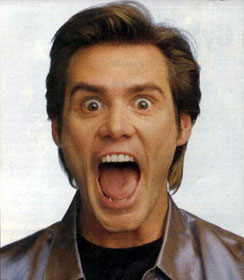 Jim Carrey is a fairly well-known sufferer of Bipolar I. His wife Jenny McCarthy has spoken about it publicly. It can be extremely debilitating.

Like Bipolar II, Bipolar I is a mood disorder but instead of long periods of depressions interrupted by relatively brief episodes of hypomania it is almost flipped around. Bipolar I sufferers have longer manic periods than depressive periods. Mania or a manic period is similar to hypomania but much more extreme. Mania is a state of being marked by intense amount of energy, euphoria, ideas of grandiosity and impulsive or reckless behavior. Full blown mania also includes hallucinations both auditory and sometimes visual. Many people experiencing a manic episode (i.e. experiencing mania) will have hallucinations and delusions related to a religious context such as being a savior, the devil or a prophet of God warning of the world’s impending doom. This doesn’t necessarily occur with all sufferers but is a fairly common theme. There is little need for sleep during a manic episode. People experiencing them will continue on for days without sleep until they finally crash. This condition severely impacts their social relationships and ability to function in society such as holding a regular job. Violent mood swings are very common, including bursts of anger due to high degree of irritability and heightened senses.

Although Bipolar I can be more debilitating than Bipolar II both have their significant battles that must be fought. Medication is usually prescribed for both. In Bipolar I, during depressive episodes, patients usually receive an anti-depressant as well as a mood stabilizer such as lithium, valproic acid (Depakote), an anti-psychotic such as olanzapine (Zyprexa) or an anticonvulsant such as  carbamazepine (Tegretol). The mood stabilizer keeps the bipolar patient from entering a manic or hypomanic episode. Sufferers of Bipolar II are usually not prescribed mood stabilizers as their hypomanic episodes are not so severe that they cause serious harm to themselves or others or require psychiatric hospitalization. 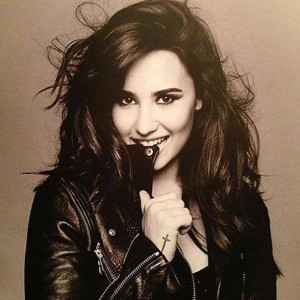 We must thank those who are brave enough to not only step forward and accept their own diagnosis for their own growth and improvement but those who are also willing to share their affliction publicly so as to spread awareness and offer a voice to those who feel alone and alienated with their struggle.

Demi not only speaks openly about her struggles or past struggles with bipolar, cutting, bulimia and substance abuse but also bullying. She was bullied growing up and it affected her immensely. She is a firm voice speaking out against bullying and those who bully others.

Help Despite the Perceived Stigma & Taboo

If you are suffering from any sort of problems or issues that leave you feeling alone, isolated, depressed, angry, confused, embarrassed or ashamed, please reach out and talk to someone you trust. Whether that someone is a friend, family member, hotline volunteer or counselor, just make sure you do. There is nothing to be ashamed of. We all have our battles, the important thing is facing them bravely and seeking help to improve ourselves. We can’t do it alone.

Previous: My Evening With Buddhist Nuns – Lessons of Attachment & Letting Go
Next: The Filter Bubble – What the Internet is Hiding From You