Ever wonder why drinking beer causes a beer belly? WebMD, AskMen.com, BBC.com and other popular websites say its a myth and that the Beer Belly phenomenon can simply be chalked up to the extra calories from drinking beer after beer.

Not true! Come on guys, you’re getting lazy.

Doing my own research and connecting some dots I have discovered some science that tells a different story. Beer has a tendency to create a certain compound in the body that has been linked to the traditional “Beer Belly.” The name of this compound? Uric acid.

Increased uric acid levels change your metabolism and the way you store fat.

Now, in my time I have seen a Beer Belly or two. I’ve even witnessed a guy who had a faint six pack of abs despite a massively large protruding gut. How can that be, you ask? This results from visceral fat accumulation or fat that builds up around the organs inside your abdominal cavity instead of outside it over your abdominal muscles (which is more usual). 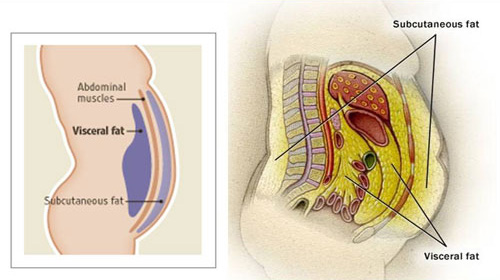 However, certain genetic predispositions or metabolic conditions can result in more fat being stored within this abdominal cavity and predominantly around the internal organs. An increase in uric acid has been linked to increase this type of fat storage. (1) (2) (3)

Uric acid is an antioxidant and in small quantities is good but in excess can cause things like gout and metabolic disorders.

A sad fact for you voracious beer connoisseurs is that your tasty brew increases uric acid levels in the body.This is due to the brewer’s yeast used and a high level of guanosine.  (4)

So a “True Blue” Beer Belly tends to be a belly that has that smooth and taut appearance, much like a pregnant woman. Visceral fat is behind that peritoneum layer behind your abs and so as it grows outward, the surface pressing against your stretched skin is more uniform; whereas the more commonly known subcutaneous fat is usually characteristically soft and lumpy.

A Combination of Contributors

Drinking beer, especially large quantities, results in consuming a large amount of calories (150 per beer on average) and are “empty calories” that more than likely will be stowed away as fat. Some will be packed on as visceral fat around your organs to contribute to that classic Beer Belly and some will be packed on as our soft and lumpy variety (subcutaneous fat).

While drinking, there is also a strong inclination toward eating more and typically food of a not so healthy variety… namely pizza, burgers, microwave food and fried foods.

The way you store fat is also dependent on your body’s unique physiology, based on both your diet/fitness and your genetics.

All of these additional considerations play into weight gain that is common among regular drinkers.

So Eat, Drink and be Merry but… 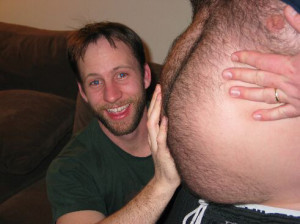 The beloved Beer Belly. In some circles it is known as a Buddha Belly and those who rub it are granted good luck

Try to offset some of the ill health effects of beer over consumption by getting plenty of exercise and making healthier food choices.

Also, keep in mind that visceral fat… the kind that swallows up your organs, is the most dangerous kind of fat and leads to a shorter lifespan due to a number of negative health repercussions (mostly of the cardiovascular kind). (5)

So there ya have it. Beer Belly is not some myth to be lumped together with gnomes, fairies and Big Foot; its a true phenomenon with some serious scientific evidence to back it up.