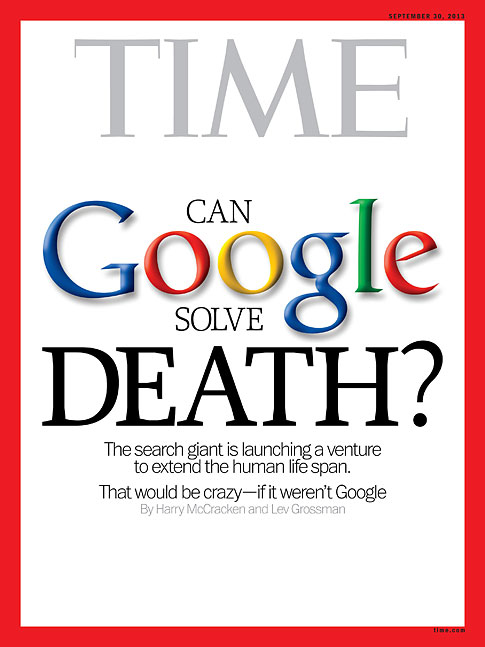 In the TIME Magazine article Google Vs. Death we were informed that the search engine giant Google has created a division or underling company called Calico that is looking into the matter of longevity, anti-aging and the general pursuit of the proverbial “Fountain of Youth.”

One can’t help but think, “What would they be researching? What is the most current, cutting-edge science available in the the life extension arena? Are we even close?” This article addresses the 9 most promising areas of scientific research that are making serious leaps towards extending the human life span.

Nobel Prize Subject – The role of telomeres and telomerase in human aging was the subject of research that jointly awarded Elizabeth H. Blackburn, Carol W. Greider and Jack W. Szostak with the Nobel Prize in Physiology or Medicine 2009.

What are telomeres? Telomeres are the ends or tips of your chromosomes. Chromosomes are the structures that house your DNA. As a popular analogy, if your chromosomes were shoe laces, think of telomeres as the plastic coated tips at the ends. Now, what happens when those plastic tips eventually wear down to nothing? Your shoe laces begin to fray, then unravel and not too long after that you say sayonara! The same occurs with chromosomes and telomeres. As you age, it is the natural state of affairs for your telomeres ( the protective ends of your chromosomes / DNA ) to become shorter in length. As this occurs the incident of more genetic damage occurs and then manifests as increased aging.

What is telomerase? Telomerase is an enzyme that adds the protective sequence of DNA known as telomeres to the ends of your chromosomes. Going back to our shoelace analogy, you only get so many pairs of shoelaces and once they fray and disintegrate that’s the end of life for us. If we can manage to continually repair those tips then we can extend our lives.

The first supplement created with the use of this research is currently available and licensed by TA Sciences called TA-65 and can be found here. It is fairly expensive, however, it’s current price is in meager comparison to its original offering. The price may continue to be driven down as initial investment costs are recouped.

An excellent book regarding the matter: The Immortality Edge: Realize the Secrets of Your Telomeres for a Longer, Healthier Life by Michael Fossel, Greta Blackburn and Dave Woynarowski.

Here is a great TedMED talk delivered by Calvin Harley on telomerase and it’s anti-aging properties.

Turning Off Aging Genes – Dr. David Sinclair, PhD discovered through his work with yeast cells ( much to the chagrin of his opponents ) that there are a group of proteins, now labeled as sirtuins, that enzymatically turn off a group of genes that promote the process of aging.

Genes and Aging – Most people do not know that different genes are active in your body during different times in your life. There is somewhat of a sequence of genes that become activated as you age. Some of these help us mature and age in a positive context but some of them promote our biological decline resulting in the degenerating physical appearance and health effects of aging. We actually don’t want ALL of our genes turned on because many of the genes that become activated later in life are like these mentioned genes. They are programmed cues for aging and eventual death.

Pac-Man-Like Gene Deactivators – Using the analogy of David Sinclair, sirtuins are like little enzymatic chompers that come in and deactivate or turn off the aging genes that have inevitably been flipped on as mature adults.

Resveratrol and Sirtuin Activators – Resveratrol a compound that was isolated from red wine and received a lot of media attention is an activator of sirtuins and can therefore activate their anti-aging effects. Please take note that the amount of resveratrol in wine is insufficient to activate therapeutic levels of the anti-aging proteins. It would take 200 glasses of wine to achieve the levels of resveratrol needed to stimulate the anti-aging cascade. Don’t attempt to do so! However, hundreds of other sirtuin activating compounds have been discovered and the most potent 3 are currently undergoing clinical trials. They were sold to Glaxo-Smith-Klein and are intended to be marketed towards diabetic conditions. This is a narrow band of their potential clientele and far-reaching capabilities but pharmaceutical companies must choose from one of a few narrow categories. The FDA doesn’t really endorse the concept of clinical efficacy for anti-aging compounds. With that in mind… think of this as a great success and step forward in very promising research.

Sirtuin Analogues or Bioidentical Entities – Perhaps more research and science will be able to implement a process able to create and pharmacologically deliver sirtuin proteins, benefiting us with their ability to curtail biological aging.

Here is David Sinclair at TEDx Sydney in 2013 sharing his work on sirtuins and anti-aging.

Preclinical studies have shown that melatonin supplementation increases lifespan by 20% in lab animals.

Isn’t That The Sleeping Hormone? Although melatonin is primarily known in the public sphere as a sleeping aid, it is much more than that and continuing research shows that to be increasingly true. Melatonin is a naturally occurring human hormone produced and secreted by the pineal gland. The pineal gland is a small ( size of a grain of rice ) pine cone shaped gland located in the middle of the brain that releases melatonin, serotonin and as theorized by the work of Dr. Rick Strassman, DMT ( The Spirit Molecule ). Melatonin is also secreted by the intestines and various other tissues throughout the body.

Biological Clock – Melatonin helps regulate our bodies in numerous ways, many of which we aren’t fully aware of yet. It regulates our circadian rhythm, also known as our daily 24-hour biorhythm or light-dark cycle. When we are in darkness the pineal gland produces melatonin.

Anti-Aging – Melatonin is actually being found to be a powerful anti-oxidant and it is not limited like other antioxidants in crossing the blood-brain barrier. Melatonin crosses the blood-brain barrier and provides the brain relief from oxidative stress, enhances mood, cognition and prevents cellular damage related to aging. It also aids the body’s immune system tremendously. There is an obscene laundry-list of clinically demonstrated benefits of melatonin including decreased LDL ( bad ) cholesterol levels, increased HDL ( good ) cholesterol levels, cancer adjuvant therapy, protectant against diabetic complications, fights obesity, delays alzheimers and prevents osteoporosis.

An article entitled Beyond Sleep: 7 Ways Melatonin Attacks Aging Factors discusses melatonin and anti-aging in more detail with references to clinical studies given.

And here a research study found in the PubMed database Melatonin, Human Aging and Age-Related Diseases.

Free-radical scavengers – Antioxidants are compounds that are known to scavenge or bind to and neutralize harmful oxidative free-radicals that would otherwise wreak havoc on body tissues and DNA. Some of the most natural processes of aging comes from the oxidative damage endured by our bodies. If we can minimize this damage, especially that done to our DNA than we can retard or slow the effects of aging. This has caused quite the stir in the popular health community. Everyone gets their ears piqued when they hear things like blueberries have antioxidant properties. Looking at these compounds and understanding them better can help elucidate further age extending strategies.

Caloric restriction can increase the sirtuin proteins that help turn off those aging genes. A scientist in the 1930’s conducted research on rats demonstrating that decreasing caloric intake to the extent that it was above malnourishment but did not allow for fertility, actually increased the lifespan of the rats by 40%. This has been the foundation for numerous subsequent studies showing the same results in multiple organisms and animals. While starving ourselves is not something many of us want to do to extend our lives, our technology and scientific understanding has progressed to the point where we can discover the mechanism behind this and then make appropriate biological applications to serve us.

Why does this work? We have just recently discovered that inducement of the SIR2 or sirtuin proteins that turn off aging genes are part of the equation. I am sure there are other significant pathways that are contributing the anti-aging effects of caloric restriction. We shall see what else develops down the pipeline.

Cloning? That’s right. Don’t think we’ll ever see the day? We already have. In 2006 we saw the first successful bladder transplant from a cloning procedure using the patients’ own cells.

Read more in this article Bioengineered bladders successful in patients.

Researching stem cells and learning ways to possibly repopulate our bodies with younger cells is a promising line of thought to the aging problem. There are ethical debates that surround this topic, especially in the attainment of stem cells from aborted fetuses and such. However, most do not oppose acquiring stem cells from more ethically sound sources such as the umbilical cord.

Organ Replacement – It is usually one or more of our organs failing that causes our health decline and eventual death. Being able to replace a dysfunctional organ at will would significantly add years to the human life span. Again, thoughts of organ harvesting and “biological meat markets” so to speak, have been grey areas and sometimes provoke disturbing thoughts of dystopian futures.  These thoughts and sentiments have found their way into prominent Hollywood movies and other popular media.

Mimicking and extracting from nature have been the most fruitful methods of modern science in discovering amazing breakthroughs in health therapies, treatments and supplements.

Rasayans – These are known in the ayurvedic or traditional indian medicine system as “longevity herbs” and serve as a promising body of natural sources to discover important compounds to aid human health… especially in the aging category. These include but are not limited to:

China’s Immortality Herb – There is a Chinese tea that claims to increase the health and ultimately, the longevity of those who drink it. The tea is made from the herbaceous plant Jiaogulan ( Gynostemma pentaphyllum ) which is actually a quite nice and decorative climbing vine.

Advanced Medical NanoRobots – The subject of discussion for decades by the futurist Ray Kurzweil, which is also found in his recent book The Singularity is Near: When Humans Transcend Biology, we have a long way to go before we understand the body enough to even utilize non-existent microscopic technology able to repair our body. Thoughts of an Outer Limits episode with disastrous consequences comes to mind. The concept, if perfected and free from concern, would be a revolutionary godsend, albeit one that, at this time, still seems too creepy to fully entertain.